“They” Got To Julian Assange! Wikileaks Letdown Or Something Else? 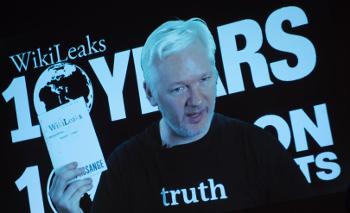 For months Wikileaks Julian Assange, has been beckoning alternative media like a fish being taunted by a baited hook with what he claimed to be “information that would put Hillary away for good.”

Early this morning multiple followers were upset by his lack of information. Rather than delivering on his promise, he told the story of his life on Wikileaks and the countless threats he’s had on his life—not to mention it was their 10 year anniversary. At the midpoint of his speech Julian Assange stated that the U.S. media hyped the report and that if he was going to release anything, he wouldn’t do it at 3:00am. Though he promised to “deliver” once again with “bombshell” information on Hillary at the end of this year… you know AFTER we all already voted on a candidate.

Did someone get to Julian Assange? Was he cut a deal? Or was it just one big trolling event? All that and more below…

This Could Get Me In Trouble With the Left: Russia Being Blamed and Here’s What We’re All Thinking But No One Will Dare Report