The bible tells us that in the later days a dictator will rise from the shadows and take over the world. This character, known as the Antichrist, will rule and reign  over every tribe, tongue, and nation, and literally usher in all hell on earth.

While no one can pin down with 100% certainty just who this man will be, we can watch and see who might fit the biblical narrative of this devious man. People such as Hitler, Stalin, Saddam Hoessein, Obama, Pope Francis, Prince Charles, Erdogan, and many others have all been labeled as potential candidates. Now we can add yet another name to the list of candidates.

This new Antichrist candidate and communist, Nursultan Äbishuly Nazarbayev, is the President of Kazakhstan and leader of this New World Order City, Astana.

The city is the first large capital being built in the 21st century. The world “Astana” originates from Persian Astana and derived from the word, Istadan, which literally means “threshold,” implying it’s sort of a shine town.

The city is being constructed with futuristic occult symbolism and contains many references to sun worship. Many believe the city was specifically built as a place one could worship the “sun god.” 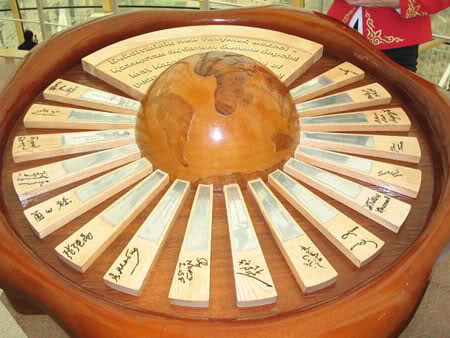 1. The Antichrist will present himself to the world as a messiah figure who is an economic, political, and military genius.

“[The Antichrist] will be a master of deception and will become arrogant; he will destroy many without warning. He will even take on the Prince of princes in battle…” Daniel 8:25

“Then the king shall do according to his own will: he shall exalt and magnify himself above every god, shall speak blasphemies against the God of gods, and shall prosper till the wrath has been accomplished; for what has been determined shall be done…he shall honor a god of fortresses [war]; and a god which his fathers did not know he shall honor with gold and silver, with precious stones and pleasant things.” Daniel 11:36-38

It’s evident that the Antichrist will do as he pleases. He will magnify himself above God and speak blasphemies against Him. He is a brilliant military strategist and worships the god of war. He is evil on every front, yet he parades himself as the ‘savior’.

2. The Antichrist will perform powerful signs and wonders and deceive many with lies. He will even cause fire to come down from heaven.

“The coming of the lawless one is according to the working of Satan, with all power, signs, and lying wonders,  and with all unrighteous deception among those who perish, because they did not receive the love of the truth, that they might be saved.” 2 Thessalonians 2:9-10

“And [he] performed great signs, even causing fire to come down from heaven to the earth in full view of the people.” Revelation 13:13

3. The Antichrist will rise from among 10 nations.

“After this I saw in the night visions, and behold a fourth beast, dreadful and terrible, and strong exceedingly; and it had great iron teeth: it devoured and brake in pieces, and stamped the residue with the feet of it: and it was diverse from all the beasts that were before it; and it had ten horns. I considered the horns, and, behold, there came up among them another little horn.” (Daniel 7:7-8)

“And the ten horns out of this kingdom are ten kings that shall arise: and another [the Antichrist] shall rise after them.”  (Daniel 7:24)

4. The Antichrist will be a world leader and will do as he pleases for 42 months.

“He was given authority over every tribe, people, language and nation.” Revelation 13:7

“Then the beast was allowed to speak great blasphemies against God. And he was given authority to do whatever he wanted for forty-two months.” Revelation 13:5

5. The Antichrist will be an impressive speaker who prevails over three Kingdoms, changes times and laws, and makes war with the saints.

“Then I wished to know the truth about the …other horn which came up [the Antichrist] , before which three fell, namely, that horn which had eyes and a mouth which spoke pompous words, whose appearance was greater than his fellows. “I was watching; and the same horn was making war against the saints, and prevailing against them…“ (Daniel 7:19-21)

6. The Antichrist will not regard the desire of women.

“He shall regard neither the God of his father’s nor the desire of women, nor regard any god; for he shall exalt himself above them all.” Daniel 11:37

This does not necessarily imply he will be a homosexual. Although that is a possibility, I lean more toward the fact of him caring not for women. Like the Islamic religion. Women are considered only a pleasure for men. They can do with them as they please. The Antichrist will have a similar mindset.

7. The Antichrist will be worshiped.

“All who dwell on the earth will worship him, whose names have not been written in the Book of Life of the Lamb slain from the foundation of the world.” Revelation 13:8

Obviously Christians will refuse to worship the beast and as a result they will be put to death by beheading. (Revelation 20:4)

8. The Antichrist will make a peace covenant with the nation of Israel for seven years. Additionally he will put an end to sacrifices and offerings taking place in the Temple.

“He will make a treaty with the people [Israel] for a period of one set of seven [7 years], but after half this time [3.5 years] he will put an end to sacrifices and offerings…”(Daniel 9:27)

9. The Antichrist will be aided by a false prophet.

“Then I saw a second beast, coming out of the earth. It had two horns like a lamb, but it spoke like a dragon. It exercised all the authority of the first beast on its behalf, and made the earth and its inhabitants worship the first beast, whose fatal wound had been healed.” Revelation 13:11-12

The Antichrist will not be alone. Another man, also empowered by Satan, will rule with the Antichrist. This religious leader will rise to power in conjunction with the beast.

Through the scripture above we can assume that the false prophet will emerge with Christian credentials, “he has horns like a lamb.” Lambs in the Scripture signify Christianity. It also tells us that he, “speaks like a dragon.” This implies that he will be controlled and directed by Satan. The False prophet will lead the one world religious system that is coming.

10. The Antichrist causes all to receive a mark on their hand or forehead.

“[The False Prophet] forced all people, great and small, rich and poor, free and slave, to receive a mark on their right hands or on their foreheads, so that they could not buy or sell unless they had the mark, which is the name of the beast or the number of its name. This calls for wisdom. Let the person who has insight calculate the number of the beast, for it is the number of a man. That number is 666.” Revelation 13:16-18

The Antichrist and the False Prophet will strike their most horrific blow at the level of basic necessities. The False Prophet will establish the Mark of the Beast, a system which forces all to receive a mark or their hand of forehead and if you refuse you will be killed and you cannot buy or sale anything without it. This could be a chip implant or the mark of Allah.

11. One of the Antichrists kingdom will be assassinated and resurrected

“One of the heads [kingdoms] of the beast seemed to have had a fatal wound, but the fatal wound had been healed. The whole world was filled with wonder and followed the beast.” Revelation 13:3

12. The Antichrist will exalt himself above God and desecrate the Temple.

“Let no one deceive you by any means; for that Day will not come unless the falling away comes first, and the man of sin is revealed, the son of perdition, who opposes and exalts himself above all that is called God or that is worshiped, so that he sits as God in the temple of God, [the Jewish Temple] showing himself that he is God.” 2 Thessalonians 2:3-4

“‘I will ascend into heaven, I will exalt my throne above the stars of God; I will sit also upon the mount of the congregation, in the sides of the north.” Isaiah 14:13

13. They will set up an idol declaring it to be worshiped.

“Then as a climax to all his terrible deeds, he will set up a sacrilegious object that causes desecration, until the end that has been decreed is poured out on this defiler.” (Daniel 9:27)

” [The False Prophet] ordered the people to make a great statue of the first beast [the Antichrist]… He was then permitted to give life to this statue so that it could speak. Then the statue of the beast commanded that anyone refusing to worship it must die.” Revelation 13:14-15

14.  The Antichrist and his army make war with God and fail

“Then I saw the beast and the kings of the world and their armies gathered together to fight against the one sitting on the horse [Christ] and his army. Then the beast was captured, and with him the false prophet who worked signs in his presence, by which he deceived those who received the mark of the beast and those who worshiped his image. These two were cast alive into the lake of fire burning with brimstone. And the rest were killed with the sword which proceeded from the mouth of Him who sat on the horse.“ Revelation 19:19-21

New Evidence Confirms We Are In the Midst of Earth’s Final Hours-A Godless Planet To SOON Be Shaken To Her Knees! (Videos)